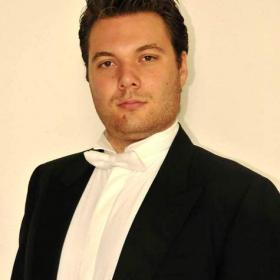 Born in Rome, at the age of ten he was selected as the solo voice of the "Sistine Chapel" to perform in front of His Holiness John Paul II, recording CDs and participating in numerous tours in Italy and abroad.

In 2000 at Teatro dell'Opera di Roma,he had the opportunity of singing the role of "Pastorello" (alongside Luciano Pavarotti, with the direction of Placido Domingo and the direction of Franco Zeffirelli). Later in the same Theater he sang in "Le joungleur de notre dame" by Massenet (an enfant) and in "The Magic Flute" by Mozart (dritter knabe).

In 2013 at the Teatro Alessandro Bonci in Cesena and at the Fabbri di Forlì, under the direction of Maestro Paolo Olmi, he made his debut as "Pinkerton" in Madama Butterfly, Also in the same year at Teatro dell' Opera Rome that of "Alfredo" in Traviata and in Florence "Turiddu", in Cavalleria Rusticana.

At the Teatro Argentina in Rome, he recorded for RAI radio a concert in honor of His Holiness Pope Ratzinger (October 2013).

After numerous appearances at the Teatro dell'Opera in Rome (and at the Baths of Caracalla), he alsosang on the occasion of the 30th anniversary of the death of Mario Del Monaco at the memorial concert.

In the summer of 2015 he was involved in the Puccini Festival of Torre del Lago in Madama Butterfly, also the role of Rodolfo (Boheme) At the Greek Theater of Taormina, and the Teatro Antico di Pompei roles of Ismale (Nabucco) and Alfredo (Traviata)

2016 he recorded the integral of Mascagni's unpublished romances, paired with Amarilli Nizza (distributed by the Naxos label) and sang the roles of the "Duca di Mantova" (Rigoletto) and "Don Josè" (Carmen) in Rome.

2016 he also toured for the traditional Tuscan theaters where heplayed the roles of the "Duke of Mantua" and "Alfredo".

In December 2016 he was invited to London to sing a Puccini recital: shortly after he debuted in the prestigious Golden Hall of the Musikverein in Vienna, enjoying great success with the public and critics.

2017 he made his debut in Mozart's Requiem (Basilica of Sant'Andrea della Valle) and in May he took partin a recital in memory of Karajan in Lucca and Florence (Sala dei Cinquecento, Palazzo Vecchio).

2018 concerts recitals and recordings throughout Europe

Among the roles interpreted there is also that of Count Almaviva in the Barber of Seville (Greece) BBC and Sky International filmed Boheme with Michael singing (Rodolfo) at the Teatro del Giglio di Lucca,

2020 he has been invited to sing Rigoletto: studio recording CD for American and Australian business.

He is the soloist of Vaticano:

He is the artistic director of "New Opera Talent International Competition", in Rieti, Flavio Vespasiano Theatre.