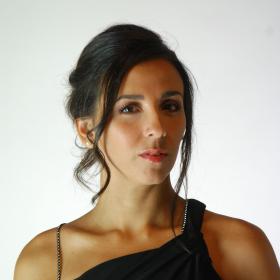 After a Scientific Degree, attracted by the Opera world, in 2007 she enters theConservatorio Niccolò Paganini in Genoa, and graduates with top marks inSeptember 2012, under the guidance of mezzosoprano Maria Trabucco. Whilestudying, she is chosen to represent the School at the prestigious Premio Nazionaledelle Arti. After the Diploma, international mezzosoprano Gloria Scalchi invites herto join the Classe di Perfezionamento for two more years.

Between 2010 and 2011 she performs in prime-time television shows (IRaccomandati, Mezzogiorno in famiglia) on the RAI national channels. At the sametime she starts working on her stage confidence playing leading roles in an OperettaHighlights production which tours the major cities in Piemonte.

She is Cherubino (Le Nozze di Figaro) in Bosco Marengo, an Bess (Porgy and Bess)under the baton of M° Gian Marco Bosio. The same production was revived later atthe Auditorium Dolci Terre in Novi Ligure for the Festival Marenco.

In February 2013 the Italian Institute of Culture in Morocco invites her for tworecitals: the first in the Marrakech Theatre, the second at the Embassy in Casablanca.In March she is part of the production of the show Telecamere su...Verdi! created,written and directed by Roberto Iovino and Andrea Nicolini. The performances takeplace in the E.Montale auditorium in Genoa and in the Shalom theatre in Empoli.

In 2014, at the T.O.S.C.A. Competition, she wins the very ambitious prize of ascholarship for a masterclass with Mariella Devia; since then, Marika has started aprocess of vocal refinement with the great international star.

In march 2015, she is again Cherubino at the Teatro Gustavo Modena in Genoa, Norina for the Sorrisi Lirici Festival in Diano Marina and covers the leading role inAlberto Caruso's Piccolo Principe for the world premiere at the Teatro Carignano in Torino. Then, she is in Saint-Malo for the International Festival Si tous les Ports du Monde.

On the concert stage, she is the solo soprano for two concerts in the series I ConcertiSpirituali del Gonfalone, under the guidance of M°Marco Zambelli; at the program,G.F.Handel's Dixit Dominus and the Ode for the birthday of Queen Anne andA.Vivaldi's Gloria.

Her debut in a Fondazione Lirica takes place at the Teatro Carlo Felice in Genoa,again A.Vivaldi's Gloria, for the opening concert of Congresso EucaristicoNazionale 2016. For the same Fondazione, she has also sung Tebaldo in G.Verdi'sDon Carlo, with an international cast under the baton of M° Valerio Galli.

Among other operatic roles, we can also mention Poppea, Pamina and Frasquita in aCarmen conducted by M°Attilio Tomasello at the Audi Arena in Györ (Hungary).