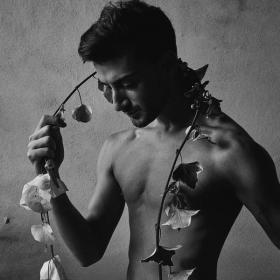 Study with distinguished professionals in the sector (Radu Ciucà, Ilie Ion, Irina Chistyakova, Dino Verga, Steve La Chance, Eugenio Buratti, Eugenio Scigliano, Susan Sentler, ... etc.).  After graduating in classical dance signed by Radu Ciucà and Steve La Chance, he participates and wins numerous prizes, recognitions and educational scholarships in the Company of Renato Greco in Rome, at the Teatro Nuovo in Turin, in the DanceHaus Academy of Susanna Beltrami, in the school  of the Tuscan Ballet directed by Cristina Bozzolini.  He then participates in the television broadcast Amici di Maria De Filippi, C'mail per te, Mattino 5. He is the testimonial of the HIV awareness campaign "Facoltà di Amare" promoted by the three Roman universities, Universita La Sapienza, Tor Vergata, Rome  three.  He graduated from the School of Opera in Rome directed by Paola Jorio.  Dance within the "City of Dance Award" a creation with the Etoile Luciana Savignano.  The Opera of Monsignor Marco Frisina is the principal dancer of the Kolossal La Divina Commedia with the creations of the Oscar winner Carlo Rambaldi and dances on tour throughout Italy.  Pierre Cardin chooses him to dance in his musical comedy "Casanova, Amori e Inganni in Venice" on a world tour which debuts in Piazza San Marco in Venice, receiving thanks from the Presidency of the Italian Republic.

He dances in Paris at the Espace Pierre Cardin, at the Athens Opera, in Moscow in the Kremlin, as well as in Kaluga.

He dances on Rai 1 in the Sunday In transmission alongside Lorella Cuccarini with the choreography by Luca Tommassini.  Collaborates with the American Circus of Flavio Togni. Julien Lestel invites him to his company, the Compagnie Julien Lestel, based in the Marseille Opera with which he works in the Major Theaters of all France (Marseille Opera, Theater de Champs Elysee ...) as well as in Italy at the Puccini Festival in  Torre del Lago.

Dance in the 'Carmen' for the inaugural season of the Royal Opera House in Muscat in Oman with the direction of the Oscar winner Gianni Quaranta.

It is the Faun in the Prélude à l'Après-midi d'un faune by Gianni Santucci for Sanofi directed by Renato Giordano.  He was chosen by the director Massimiliano Bruno to act in a scene from the film for the cinema "Viva L'Italia".  He dances in the musical for schools "Inferno Opera Rock" directed and choreography by Manolo Casalino.  Dance within the Giuseppe Valentano Stefano Valentini Prize, one of his creations "The Fear of the Mirror".

He receives the Seniores First Prize in the 2013 Baroque Sicily international dance competition. In the Konteiner Festival directed by Silvia Martiradonna, he dances his creation "Vedo senza occhi", taken from "The fear of the mirror".

Dance for the Teatro dell'Opera in Rome at the Teatro delle Terme di Caracalla in "Il Barbiere di Siviglia", by Lorenzo Mariani, choreography by Luciano Cannito.

She is a teacher for the Start-up and Professional Improvement Course for dancers / dancers, created by the Italian Dancers Association - MiBACT.

He is the choreographer and principal dancer of the opera "La Traviata" by Giuseppe Verdi on a libretto by Francesco Maria Piave, an Italian tour.

He returns to the scene at the Baths of Caracalla with the Barber of Seville by Mariani / Cannito, reaching with the whole cast the record of attendances and collections of the Theater.

He is a dancer in Giuseppe Verdi's "Jerusalem", directed by Stefano Mazzonis of Pralafera, choreography by Gianni Santucci, live from the Opera Royal De Wallonie, Liège - Belgium.

He is assistant to choreography and dancer in the television series for Rai 1 "I Medici - The Magnificent" directed by Jon Cassar.

He is assistant to the choreography in the Netflix film "Gore" on the life of Gore Vidal with Kevin Spacey, directed by Michael Hoffman.

He is the choreographer of the television series "The Doctors 3, the Power of Beauty" by Frank Spotnitz and Nicholas Meyer, a series produced by Lux Vide, Rai Fiction with Big Light Productions and Altice Group, directed by Christian Duguay.

He also takes care of the choreography of the "Devils" series produced by Lux Vide and Sky Italia, directed by Nick Hurran.